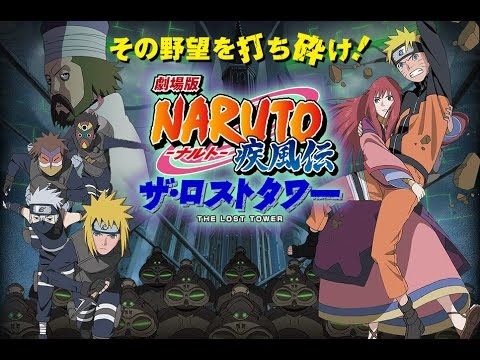 Overall 6 Story 4 Animation 7 Sound 7 Character 5 Enjoyment 5 After seeing the trailer for this movie nearly a year ago, I'll be honest and say I thought it looked really awesome! It seemed like a great idea for a Naruto movie! Now, I've seen the long awaited Naruto Movie 4 The Lost Tower, and I am, to say the least, very disappointed with it.

It wasn't the worst Naruto movie I've seen, but it was the one that I was most excited about and that's what bothers me the most. Here is what I thought of it: Story: 4 From the trailer and the description, I thought for sure that this movie would be about Naruto going into the past and meeting his dad and they would have a father-son sort of bonding (without knowing that they were related). I wanted to see Minato and Naruto as the main focus of the movie. And what do I get?

All together, Minato showed up in the movie for about 10 minutes. I wouldn't even consider him a main character. Instead of Minato taking up the spotlight, we meet a new character named Sara. The only good parts of the movie were when Minato was there; in other words, there were only about 10 minutes of the movie that I enjoyed. Focusing on other details - In the first few seconds, this movie starts off with a fight that includes Naruto, Sakura, Sai and Kakashi. I'll admit, it was a decent fight to catch the audience's attention. But after, it basically went downhill.

The first ten minutes of the movie do a quick intro to what will happen throughout the film, but those ten or so minutes were definitely not enough! Jurnal asam sitrat pdf download. Everything was extremely fast paced, especially at the beginning. There were also several gaps in the plot that made me wonder if I had missed something. That alone just spells doom for the rest of the film.

The plot doesn't matter because it wasn't any good, the only decent parts were the fighting, and even then, it wasn't incredible. Art: 7 The art in The Lost Tower wasn't terrible, but the characters didn't have all that many details, just average anime art. The background on the other hand was very beautiful and nicely detailed! During this movie, we see many buildings and sky-scraping towers. I feel like the majority of the budget for this movie went to making the background pretty. But most people focus on the characters rather than the objects behind them. Something that bugged me a little bit was the random and most ridiculous faces or body-twists that Naruto has ever made.

I have never really seen his face distort like that in the show. This little addition made it similar to One Piece expressions (as in, the eyes grow extremely wide and the mouth extends longer than is humanly possible). I am aware that anime doesn't follow the laws of physics, but in previous naruto movies and the show, they have kept things relatively realistic.

But like I mentioned, it only bothered me a little bit. Sound: 7 Junko Takeuchi is a great voice actress! She is able to voice emotions very well and that's part of what makes Naruto's character interesting and fun.

So I don't have anything bad to say about her. Toshiyuki Morikawa voices Minato Namikaze in The Lost Tower. He is also a very talented voice actor and I think the creators would have been smart to include Minato in the movie more and by doing that, give Toshiyuki Morikawa more time to talk! Saori Hayami is the voice of the new character Sara (or Saara) in this movie. She isn't a terrible voice actress, but nothing about her stood out to me. Rather than being emotional and dedicated to the voice, she sounded a bit too scripted. The music in the Lost Tower was decent enough. The only song that stood out to me though was the ending fight song! The other songs used in the movie just seemed like background noise that nobody thinks twice about. Lirik sweet child o mine. Character: 5 Naruto - for some reason, I felt like Naruto was acting too childish. Remember Naruto from the first series where he complains and whines a lot? That's what he acted like.