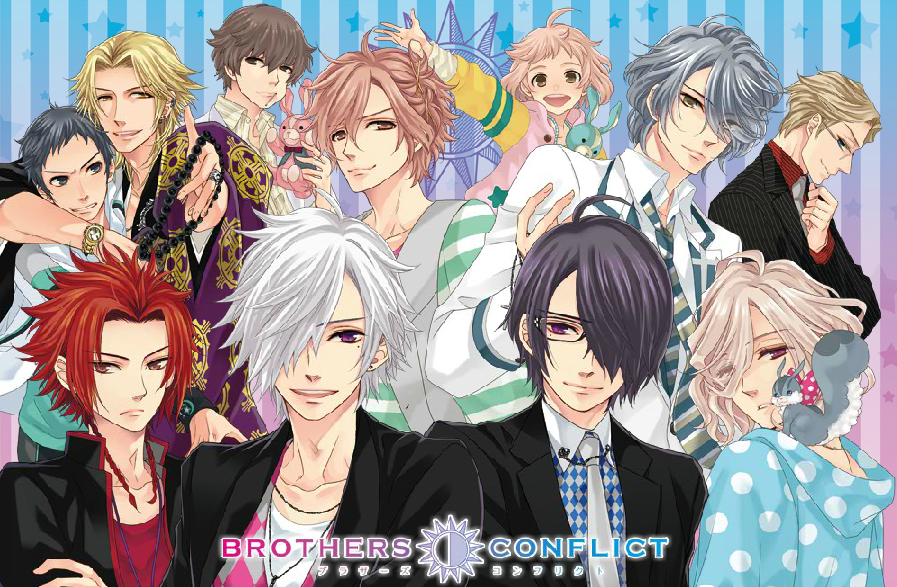 Brothers Conflict (ブラザーズ コンフリクト, Burazāzu Konfurikuto) is a game developed by Otomate and published by Idea Factory based on the Japanese novel series created by Atsuko Kanase, written by Takeshi Mizuno and illustrated by Udajo.

Ema prepares to move into the building where her 11 new brothers live. With her brothers having a range of ages, careers, and personalities, will Ema get along with her new family?

Or will they get along too well? Review: I knew as soon as I bought it and completed it a Vita port would be announced! So should you pick up the PSP games which are bound to drop in price, wait for the Vita port ( Precious Baby), or should you skip Brothers Conflict altogether? First, an introduction: unlike most otome games, the two Brothers Conflict games are based on a light novel series. Many scenes (including CGs) are lifted directly from the books. The first to be released was Passion Pink, and Brilliant Blue followed almost a year and a half later.

Each game has the same basic system and storyline, but they each contain routes for about half of the brothers. So now I’ll move on to the story. Some parts of the story are directly incorporated from the light novels, and some aspects are pretty ridiculous even for a story about a girl acquiring a whole gaggle of brothers who can or will fall in love with her. The biggest one is how Ema moves into Sunrise Residence in May, but she doesn’t find out she has 13 brothers until November. Despite getting along with her new family (and the game proves there are family albums), nobody mentions two brothers live elsewhere. While one is overseas at the start of the story, the other still lives in the area. He and Ema didn’t run into each other in six months?

Or nobody said, “Oh, hey, guess who I saw today?” at the dinner table? The fact these two show up so late affects the game: with half the year gone, their routes feel very short. If you’re like me and want to experience all the date scenarios, you might have to load a save to get all of them, as there just isn’t enough time to get all 18 dates plus the “visit his room” dialogues. In addition, the date dialogues are slightly at odds with the situations in the routes. For instance, Ema could be picking up her brother from his room every week for a date, but in his actual route, he’s like, “What are you doing here? You haven’t been here before” Parts of the dialogue also make it seem like Ema and a guy are practically an official couple, but in the actual route, they haven’t nearly reached that stage yet.

While I kind of understand why this happens from a gameplay perspective, it’s jarring from a storyline perspective. In addition, since the base story as well as most of the family events are repeated in both games, you are going to have to rewatch many scenes unless you play the upcoming Precious Baby.

The games try to keep routes unique: while events like Christmas and New Year’s happen in each route, the major conflicts vary from brother to brother. Some deal with the guy’s personal problems, others his personality, and others his relationship with one particular brother. Fortunately, none of the routes are terrible. Yes, some are miles better than others, but no route is utter garbage. With 12 (plus 1) eligible bachelors, there’s bound to be someone who steals your heart. If you have watched the anime, the guys you liked there are still likely to be your favorites here. (One guy’s personality wasn’t covered in the anime, so his route is probably the biggest shock.) On the downside, I don’t think I’d put anyone in my top five or top ten “best routes” or “best romanceable guy” lists. With so many characters and only about 15 major scenes in total, they just aren’t as deeply developed as other male leads in other games. Based on other people’s comments, some aspects of the guys’ personalities seem slightly different from the light novels, but I cannot get into this since I haven’t read the novels.